Broad Band Providers take a hit by the FCC: Why Should We Care?

Let’s be clear about something: few people know more about you than your local telco company. These firms, such as AT&T and Verizon, see all your internet traffic go through their pipes. Unless you use a VPN with proper encryption every time you go online to check the view count on your latest Snapchat Story, this means that these firms can track your every move online.

Tell me what you see

Internet Service Providers (ISPs) have insights into such things as your geolocation, app usage history, and browsing history. They can, for instance, tell that you’re at a coffee shop during lunch break, spending 45 minutes on AirBnB, before returning to Twitter, and then heading to Avis for another 10 minutes. From these data points alone they might be able to piece together that you’re probably looking to go on a vacation pretty soon and advertise all-inclusive getaway deals. They do not, however, get the data about what you did on these individual platforms: therefore, ISPs won’t know whether you’re planning on traveling to Maui or Novosibirsk, what price range of bookings you’re looking at, or if you intend to travel tomorrow or four years down the road.

Effectively, the data that ISPs have is not even that good, but it’s still among the best data in the market, and plays a vital role in the functioning of our online advertising ecosystem (there are several schemes in the Data Brokerage industry to enrich the data ISPs have, but that is outside of the scope of this article, and I’ll follow up on this with a separate post). So what ballpark are we talking about here?

You’re so money, baby, and you don’t even know it!

How much are ISPs making from all of the data they are selling? That’s hard to say precisely since companies go to great lengths to cover this information in elusive revenue stream descriptions in their Annual Reports.

All we know for sure is this: a one year investigation into the Data Brokerage sector by the Senate Committee on Commerce, Science, and Transportation pinpointed the revenue for 2012 at $156 billion in the US alone. To put this into perspective: revenue for all eCommerce platforms in the US combined amounted to $365 billion in the same year.

It’s safe to say that selling users’ personal data is a huge business. Doing a quick and dirty back-of-the-envolope calculation by breaking down data creation per age group, we arrive at the following: 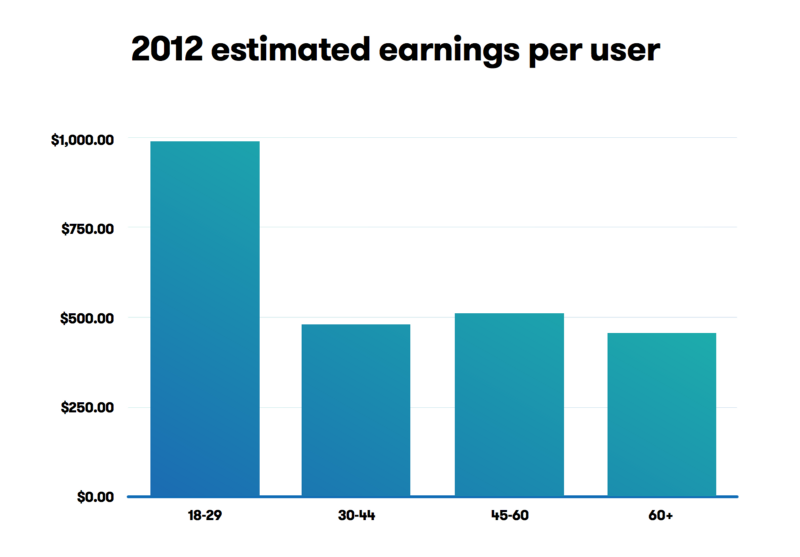 Yes, you read that correctly: people between the ages of 18–29 could have made about $1,000 doing basically nothing if the revenues of the Data Brokerage sector were distributed to the people that created the data.

So you’ve got ISPs earning all that sweet sweet cash from the data that people are paying them to be able to create and things couldn’t be better. But it is precisely at this point in time that the big bad FCC comes along and rains on their freakin’ parade. Are you kidding me? After all, one of the primary reasons for the anticipated blockbuster merger between AT&T and Time Warner for a swooping $85 billion was all the precious data they could combine and monetize.

But the FCC just voted on the side of consumers, passing a rule requiring broadband providers to get permission before gathering and giving out “sensitive” user data. This will directly hurt ISP’s ability to compile subscriber profiles, used to sell targeted ads — specifically limiting AT&T and Time Warner’s “new advertising options” that they were scheming up. According to the new rules laid out by the FCC, ISPs will have to ask users for their expressive consent every time they collect any of the following information:

Hold on a second: are you telling me that ISPs previously did not have to ask users for their permission before selling that information on?! Yes, that’s precisely what that means.

Of course AT&T immediately sent a note to the FCC complaining that “there is no sound reason to subject broadband providers to a different set of rules than other Internet companies” and claiming broadband providers will be prevented from engaging in the lucrative digital advertising game. And the Association of National Advertisers laments that the new FCC regulations against ISPs are “unprecedented, misguided and very harmful.”

Awwww maaaaan! It is fair to say that ISPs are very, very upset. And why wouldn’t they be? After all, they can no longer get access to one of the most important data sources in the market unless expressively granted by the user creating precisely this data.

The ISPs also lost no time to point to sponsored research by dubious Think Tanks that issued Op-Eds claiming that newly proposed ‘Pay-for-Privacy’ models (where internet users pay for their data not being sold [as much]) will help low-income families. Read this lovely quote right here:

Exactly, Toni Soprano would be proud.

Are we in the clear?

While privacy advocates rejoice and advertising agencies brood, users ought to remain wary for several reasons. Firms like Google and Facebook aren’t included in this new FCC regulation — they’re actually controlled by the FTC — and, combined, they already control well over half of all digital advertising, according to the Interactive Advertising Bureau. Not only does the new FCC regulation strike a blow at Comcast, Verizon and AT&T’s egos, but it literally drives advertising straight into the hands of Internet companies. And let’s be honest, that’s where they were headed anyway.

The ruling by the FCC is a big shift towards empowering US internet users. Is it the all-encompassing legislative magnum opus that will finally safeguard our data once and for all? Surely not. But it is nonetheless a huge first step toward placing the user at the heart of the data value chain. It gives power to us internet users that we’ve never had before. And it sets in motion a legislative movement that is desperately needed and surely won’t stop here. With investigations into the Data Brokerage market by the Senate Committee on Commerce, Science, and Transportation as well as the FTC and of course FCC, we probably have a lot of great new legislation ahead.